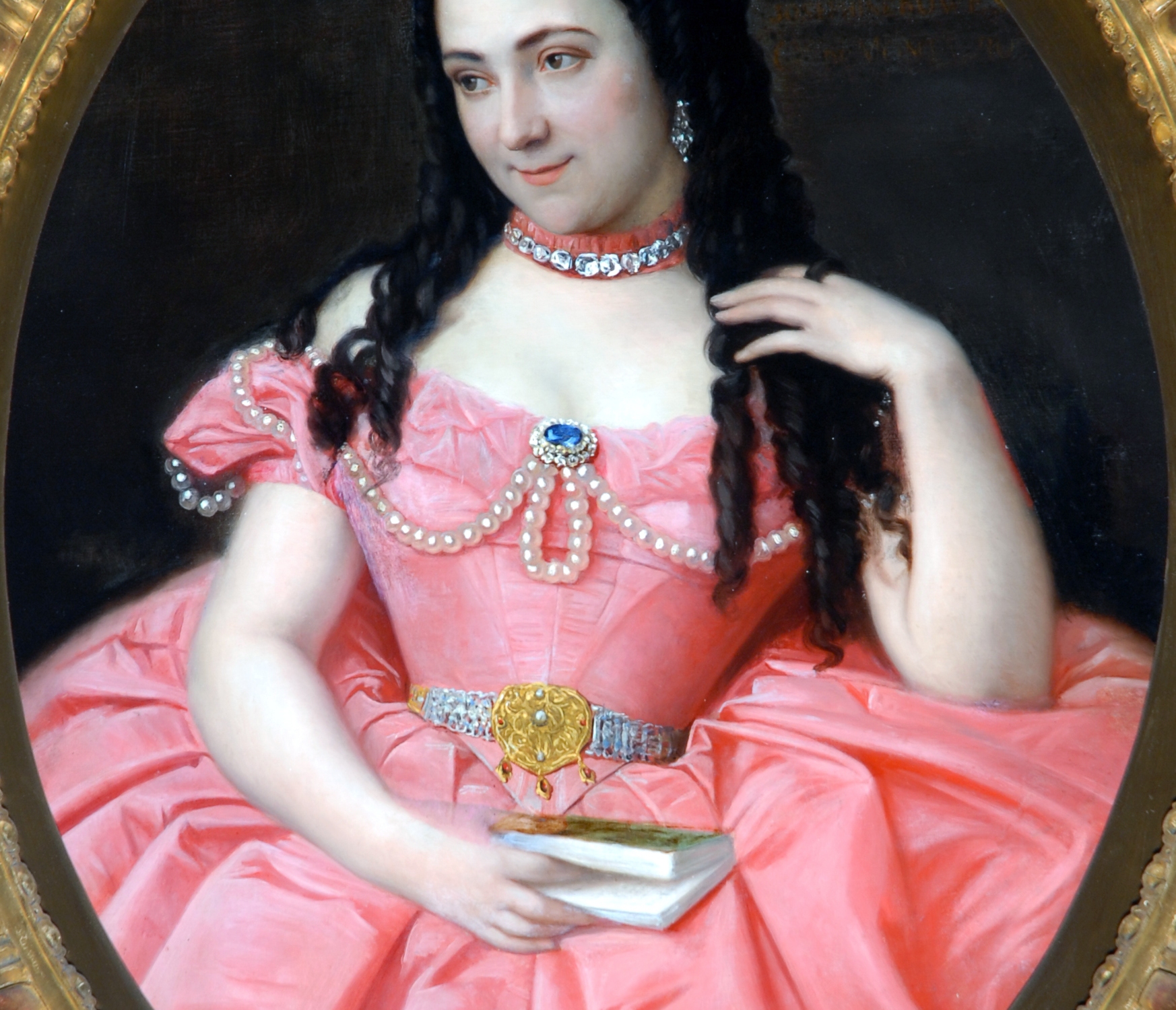 John Bowes may have been the businessman, who purchased the land and financed the creation of The Bowes Museum, but it is the women in his life who made him the man we know and celebrate.

So, who were they?

‘The most intelligent female botanist of the age’
Mary Eleanor Bowes, Countess of Strathmore and Kinghorne, was John’s grandmother. She was born on 24 February 1749, the only child of George Bowes MP, of Streatlam Castle and Gibside in County Durham, and his second wife, Mary, heir of Edward Gilbert, of St Paul’s Walden in Hertfordshire. She was brought up and educated (which wasn’t the norm for girls at that time) at Gibside Hall, near Rowlands Gill. Mary Eleanor was a very intelligent young lady and with her father’s support she indulged her knowledge. By the age of four, she could read fluently, had a gift for languages and was already taking a great interest in botany.

She was rather unlucky in her love life, which involved failed marriages, kidnapping and lots of drama, earning her the name, the ‘Unhappy Countess’. But far from it, as she was a witty and very determined woman.

After enduring years of both mental and physical abuse with her second husband, Andrew Robinson Stoney (also known as Stoney Bowes), in 1785 she filed for divorce, an act that not only was not well regarded at all back then but could also have deprived her of her inheritance. Even when her life was threatened when Stoney kidnapped her and held a gun to her head demanding she stop the divorce, she had the courage to refuse and rid herself of him.

After some traumatic years, Mary Eleanor found peace at last. She reconciled with her family and turned her attention and affection to her children. She was also actively involved in local charities and indulged in her hobbies.

She was a keen amateur botanist, who maintained hothouses at Gibside in Tyne & Wear, and at her London house, Stanley House in Chelsea, close to the Chelsea Physic Garden. Mary Eleanor Bowes commissioned William Paterson, a Scottish botanist, to collect exotic plants for her during his expeditions to the Cape of Good Hope between 1777 and 1779. A specialist botanical cabinet (circa 1775 – 1785) was engineered to house those plants on their return. Although the exact date and maker aren’t known, a botanical cabinet was commissioned around 1780 in which she could keep these specimens.  The plants were presumably dried and put onto sheets of paper to be kept in drawers or folders, as is still the practice today. This explains why the cabinet does not open at the front, but at the side, which pulls down to allow the drawers to be pulled out for the specimens to be examined on the flap below.

If it wasn’t for her personal choices and tragedies in her life, Mary Eleanor, once described by surgeon and family doctor Jesse Foot as ‘the most intelligent female botanist of the age,’ (The Lives of Andrew Robinson Bowes Esq and the Countess of Strathmore, 1810) may have realised her potential as a natural historian and been entered into the history books for her contributions to the natural sciences. However, it wasn’t to be and she triumphed in a much more important way. She succeeded in being the first woman to secure a divorce and keep her land.

Mary
Not a lot is known about Mary Milner besides the fact that she worked the Streatlam estate belonging to John, the 10thEarl of Strathmore, (Mary Eleanor Bowes’ eldest son) when she began a relationship with him. In 1811, she gave birth to his son, John Bowes.

Unfortunately, due to the etiquette of the time, Mary who lived pretty much as the 10th Earl of Strathmore’s wife, never made public appearances or entertained together with him in their homes. But we know from letters and archives that she was very involved in advising him in business decisions and the running of the estate. Together with the 10th Earl of Strathmore, she made sure that John Bowes received a good education and encouraged John on his path for art collecting. Although the Earl doted on his son, and married Mary on his deathbed in 1820, John Bowes was still considered illegitimate. He inherited his father’s property in England, but the Scottish estates and the title passed to his uncle, who became the 11th Earl (he was the great-great-grandfather of Her Majesty Queen Elizabeth The Queen Mother, 1900 – 2002.)

After her husband’s death, Mary married Sir William Hutt, a British Liberal politician who held the parliamentary seat for Gateshead for over 30 years. Hutt had been John’s tutor at Cambridge, but he became so much more than a stepfather. Surviving correspondence shows that John Bowes and William Hutt had a warm relationship, often corresponding on various matters, with John considering Hutt a helpful advisor when it came to his plans for building The Bowes Museum. Hutt was a great aid to John Bowes, often offering advice or investigating some of the requests John had for his future museum, such as the purchase of the Araucaria Araucana also known as a monkey puzzle tree for the grounds of the Museum.

William Hutt, who was involved in the colonisation of South Australia and New Zealand, named the Bowes River in Western Australia after his wife Mary, and was with John Bowes when his beloved wife Joséphine died in Paris in February 1874 and he remained one of John’s closest confidants until his death in 1882. The relationship John Bowes and William Hutt enjoyed throughout their lives, must’ve been the fruit of Mary’s calm nature and way of unifying her family against the turmoil and mercilessness of the 19th century.

When Joséphine Benoîte Coffin-Chevallier met John Bowes, she was 22 years old and John was 36. She was then known by her stage name, Mademoiselle Delorme, taken from a play by Victor Hugo. She may have been impressed by his wealth, but the attraction was genuine, mutual and lasting.

Joséphine was the daughter of a Paris clockmaker, originally from Lyons – a fascination with clockwork is apparent in the Bowes’ collection, which includes a large number of clocks and watches as well as the famous Silver Swan automaton and mechanical mouse.

Joséphine didn’t pursue her acting career, but her marriage enabled her to become a great socialite and hostess, often holding artistic salons and parties for as many as 150 guests. One of Joséphine’s friendships was with ceramic artist Émile Gallé, who created many objects for her collection and often advised her on the designs of the Museum.

In 1852, John and Joséphine married, and as a wedding gift he bought her the Château du Barry at Louveciennes, a few miles west of Paris. The château had acquired its name through Jeanne Bécu, Comtesse du Barry, the last Maîtresse-en-titre of Louis XV of France, who offered her the château.

By the end of the 1850s, John and Joséphine were still childless. It may have been this that gave impulse to an alternative ambition: to build a grand museum and amass a collection to display within it so their name would live on.

In 1862 Joséphine took the momentous decision to sell the Château du Barry in order to fund a museum to house their collection. Due to the tumultuous political scene in France, they decided that their museum should be built in England, in John’s beloved Teesdale after a French design. Even if John was the one who organised the logistics of purchasing the land, it was Joséphine who masterminded how The Bowes Museum looks today. The French design was agreed from the beginning, to help her feel more at home, and the back and forth between the Bowes couple and the French architect Pellechet, as well as many of the small details, were conducted by Joséphine.

Meanwhile, Joséphine’s aspirations as a landscape painter had begun to emerge. She studied with the Austrian landscape painter Karl Josef Kuwasseg and absorbed the work of fashionable artists of the time, particularly Gustave Courbet.

She spent much time travelling with her easel and paints, very often accompanied by her husband. Boulogne, en route to England, was a frequent destination. She also painted when the couple travelled for collecting trips or holidays.

A crucial badge of success for painters since the mid-18th century was the Paris Salon, a huge – and hugely competitive – annual exhibition of work by living artists, held by the Académie des Beaux-Arts.

As a woman, and an amateur artist of private means, Joséphine was regarded with some suspicion, so her joy at having her paintings accepted by the Salon four years running must have been considerable. In the Revue Critique, to which Joséphine subscribed, she received the following review:

‘Among our most talented landscape painters she has gained a position of great distinction. Her works shine with a vivid awareness of the beauties of nature. She combines taste and skill with liveliness and inspiration’.

She was also, of course, a patron and bought works by more than 60 of her peers.

Joséphine Bowes was a powerhouse of her era, an avid socialite, collector, artist and patron of the arts. She was a driving force in creating The Bowes Museum and deciding its outstanding and bold design. Even if she were living today, in the 21st century, Joséphine would have been a formidable woman, never afraid to take risks and lose herself in new passions, owning her right to be there through hard work and dedication.

As you can see dear reader, John Bowes was a pillar of society and a savvy businessman but without these amazing women in his life, would he ever have achieved as much?

One thought on “The Three Graces”