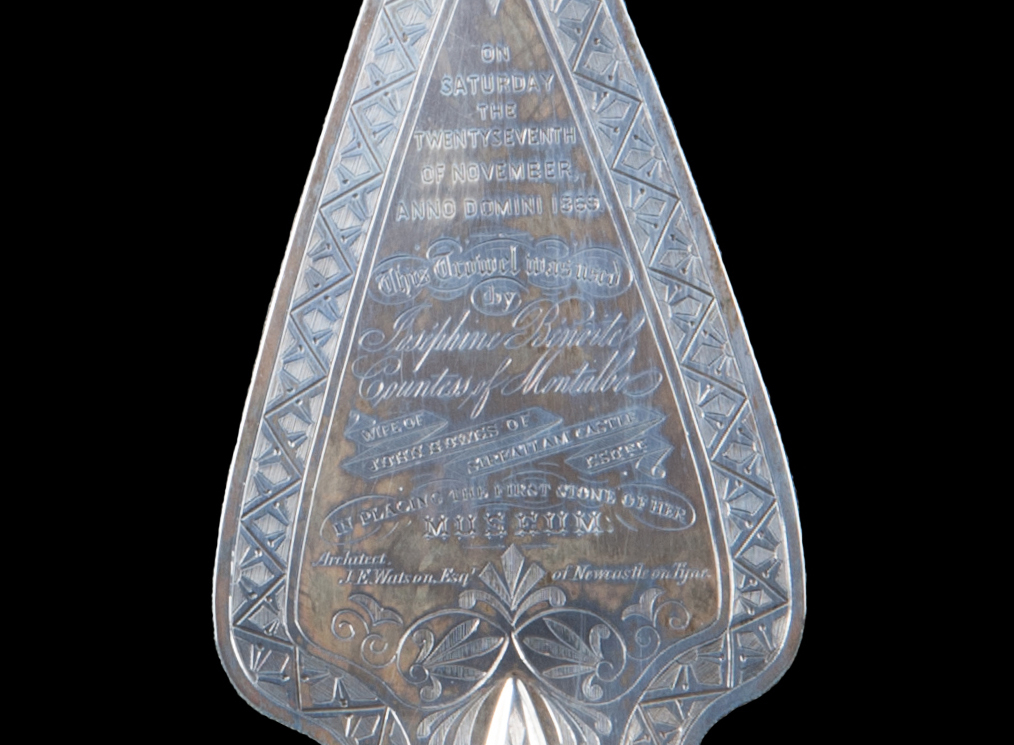 Wrapped up against the Teesdale autumn weather, a delicate French woman holds an ornate ivory handled silver trowel and moves to tap the stone in front of her. Her eyes are shining with excitement at the symbolism of the occasion. It is Saturday, November 27, 1869 and she is standing in a field in Barnard Castle with four others, among them, her husband…

‘I lay the first stone and you, Mr Bowes, will lay the top stone.’ This is what Joséphine Bowes said when she laid the foundation stone for The Bowes Museum 150 years ago.  It was to mark the official beginning of the building project which she and her husband, John, had shared and worked towards for most of their marriage.

Various plots of land on the edge of town had been acquired over the preceding years until there were 20 combined acres. A boundary wall was well underway around the site and the French architect, Jules Pellechet, had completed his first drawings. From this day forward, after ten years or so in the planning, the museum was becoming very real.

This event went unremarked in all the local press. It was a private moment shared by the couple along with their land agent, Ralph Dent, builder Joseph Kyle and architect John Watson. Though the ceremony was private there was no secrecy about it; on 15th John Bowes’ cousin, Susan Davidson, wrote to Streatlam: ‘I shall think much of you on Tuesday and I anxiously hope for a fine day – one of much interest to many as well as myself.’

Even Holmes their solicitor was not among those present. On the Wednesday following the event he wrote to Bowes: ‘Mrs Holmes and I were glad that Mrs Bowes was sufficiently recovered as to be able to get here last Saturday. We were out but did not see or hear of “the ceremony” till Monday.’

This was an important milestone and documents held in Durham County Records office show that a glass jar was bought to house some coins especially sent from London (the supposition is that the jar and coins were placed beneath the stone as was the custom as a good luck and prosperity token). An invoice for the trowel and other items used in the stone laying, including a mallet and leveller, shows a payment of £11.17s.10d (DCRO: D/BO/E7).

The ornamental trowel (X.6183) from London and a shining brass plaque were suitably inscribed to commemorate the occasion. ‘On Saturday the twenty seventh of November, Anno Domini 1869. This trowel was used by Josephine Bénoite, Countess of Montalbo, wife of John Bowes of Streatlam Castle Esq’re of Newcastle on Tyne’.

The brass plaque was a replacement for one previously inscribed with the incorrect date. This was because the foundation stone-laying had been planned for November 16, but Joséphine had sprained her ankle and foot and so the ceremony was postponed. The wrongly dated plaque (M.216) is on display in the Museum alongside the trowel (presumably the correct one is with the stone – the exact location of which is unknown).

Another invoice held in the Durham records office shows that there were celebrations in the Kings Head in Barnard Castle on November 29, 1969. There was beer, four bottles of champagne, spirits and Mr Watson’s lunch – the total coming to £4.4 s (DCRO: D/BO/E8).

Actual building work on the museum itself would not begin until spring of 1870. Sadly, Joséphine never lived to see the Museum completed. She died in 1874 when the building’s walls would have been no taller than her slight 5ft frame.

Blog by: Dorothy Brenkley, Marketing Volunteer at The Bowes Museum and with Thanks to Durham County Record Office.

One thought on “Exciting times 150 years ago…”