Elegant. Glamorous. Timeless. These three words sum up the style of a French dressmaker extraordinaire.

Madeleine Vionnet was born on 22nd of June, 1876 and was an apprentice to a dressmakers in a Paris suburb from the age of 12. Her needle skills were later refined in the Paris house of Callot Soeurs (The Callot Sisters) and she set up her own fashion house ‘Vionnet’ in 1912.

Madeleine insisted she was not a designer. She was an architect among dressmakers – a technician – using lightweight fabrics cut on the bias (diagonal to the grain) to create fluid, flattering dresses that integrated comfort and movement to look fabulous on the female form. Her designs were highly appreciated and some of her clients were Hollywood greats such as Greta Garbo, Katharine Hepburn, Joan Crawford and Marlene Dietrich.

Dresses like this black lace evening gown would’ve been wore at evening parties in the 30’s.

We could definitely see this black lace dress on the red carpet today!

Designed by Madeleine in 1938 this stunning dress is made or of Chantilly lace with appliquéd black silk velvet bows. The pale pink lamé under slip with a daring low back gives it a very contemporary feel. There are black velvet bows at the cuffs and neckline: glamorous!

Unfortunately for us today, Madeleine was an intensely private individual avoiding public shows and was not interested in self-promoting either herself or her brand, unlike other designers of the time.

Her ideal of beauty inspired her to devise Grecian-style garments free of corsets, padding, stiffening and anything that distorted a woman’s natural curves. She said: “When a woman smiles, her dress must smile with her.” The bias cut produced a silkier softer silhouette where the dress would stretch and fall as it skimmed the body.

This printed chiffon evening dress with large purple satin bow tied at the waist is an example of this. Made in 1934, the evening gown has a soft, shawl neckline and one can well imagine it being worn by a film star attending their latest premiere. Simply elegant.

Madeleine was a pioneer. Although she did not invent the bias cut, she became known as the Bias Cut Queen. She was a revolutionary.  She fought for copyright laws in fashion and for employee benefits such as paid holidays, maternity leave and health care.

Life growing up was not easy for Madeleine. She was born into a poor family in Loiret and moved with her father aged five to Aubervilliers. Briefly married at 18 and dealing with the loss of a young child, she left her husband and in 1897 she moved to London and started work as a fitter for fashion designer Kate Reilly. She eventually returned to Paris and the Callot Soeurs Company as a toile maker.

Then came a turning point in her life. After a disagreement with the manager she wanted to leave but was persuaded to stay by Marie Callot Gerber. She was offered a promotion working directly with Gerber herself and creating designs directly on live models. Madeleine later paid tribute to Marie Callot Gerber for her support.

Madeleine finally took a chance and set up her own in fashion house in 1912. As a true entrepreneur she was determined to ensure all designs realised her vision and put in as much time as needed to prepare everything, often working on the cutting, draping and pinning fabric on miniature dolls. 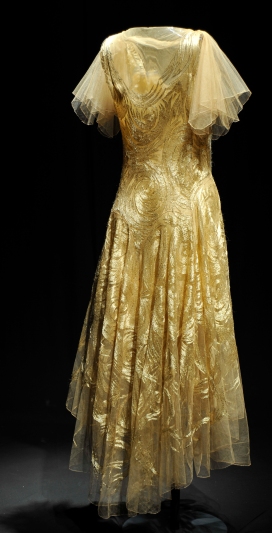 This gold net embroidered evening dress was made in 1929 yet its asymmetric high-low hem is still fashionable today. It is totally timeless.

Her fabrics – favoured from silk, georgette, jersey, chiffon, crepe de chine and organza  – were ordered two yards wider than necessary to allow for the draping and handkerchief hems.  Cowl necks and halter tops were also familiar style elements. “You have to know the obedience of the fabric,” she said.

She had to close her fashion house in 1914 but she re-established herself after the war and, in 1923, moved into bigger premises which became known as the ‘Temple of Fashion’ and she opened a HQ on Fifth Avenue in New York. She dominated haute couture in the 1930s. Hers was the first fashion house to create ready-to-wear designs from haute couture for sale in the US and she was also the first to decorate visible seams.

She had a great preoccupation with minute details and the finishing techniques of dressmaking and even though her excellence and reputation is best known to specialists, her continued influence is all the more remarkable for being based on just 25 years of independent production.

When the Second World War broke out, she decided to retire, having created about 12,000 garments during the course of her career. She died aged 98 in 1975 in Paris.

The three dresses were bought by the Museum in 2009 with help from The Art Fund, The Friends of The Bowes Museum, MLA/V&A Purchase Grant Fund and a number of private donors. 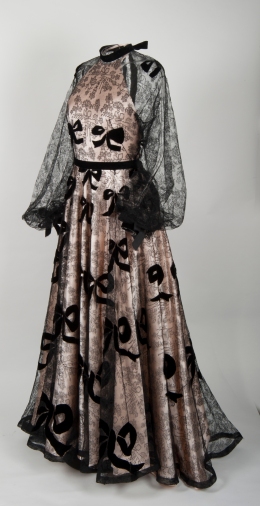 Blog by Dorothy Brenkley, Volunteer at The Bowes Museum