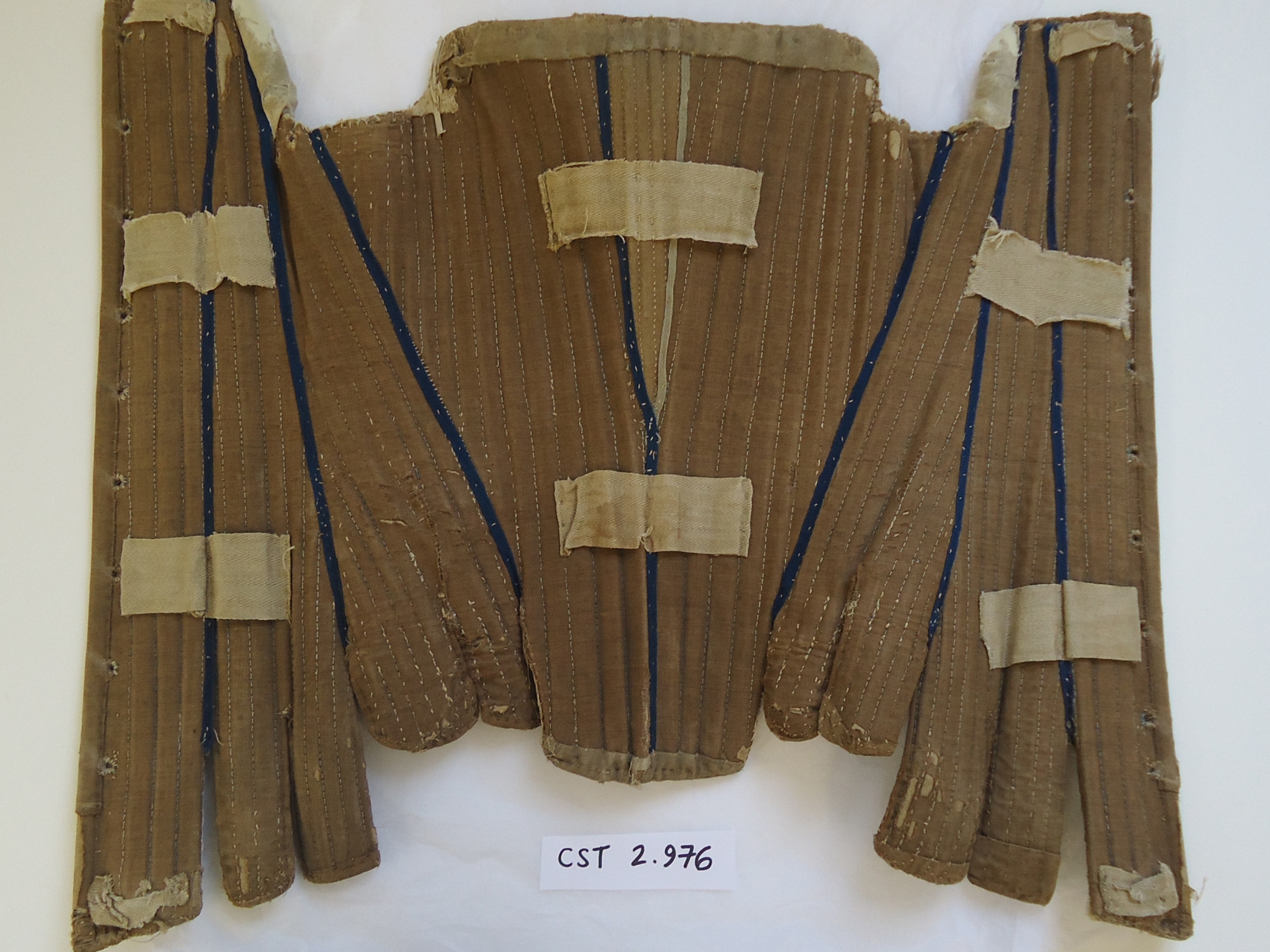 Well-rested after the Christmas break, the textile conservators are back in the studio and working on some exciting new objects.

This week I have started the treatment of a pair of stays c. 1750. They were shown in the exhibition Materials Remains in 2013 (read previous blog posts about the exhibition here and here). An earlier form of corset, the stays are a rare example of a working women’s undergarment which were found in Whitby, North Yorkshire. Although the stays are quite crudely made in plain fabrics, the evidence of wear and unusual thick wool padding beneath the lining raises questions about how the stays would have been worn, and how they may have helped the owner to carry out her work.

Although we do not know who wore the stays, we can tell a little about them from the garment itself. Taking measurements, it appears she had a short waist, narrow back, large bust, and narrow arms. The thick wool padding may have been to protect her while she worked, providing cushioning if she was very thin, extra insulation against the cold, or to help support heavy loads – the fisherwomen at Whitby carried heavy baskets on their backs. The stays are also very long in the body and cut high between the shoulder blades which would have added some much needed back support during a long working day. The armholes have been given additional wool padding around their edges – in other stays of this date, the arm holes are often bound in kid leather, giving protection from broken boning.

The technique of manufacture suggests that these stays have been made by a stay-maker, rather than home-made by the woman who wore them. They are characteristically mid-18th century in style, this includes the long tabs which would have splayed out over the hips from the waistline, and the blue wool tape covering each vertical seam which would have helped visually slim down the figure. In the damaged areas we can see that the boning is baleen (whalebone), rather than wood or cane which has been observed in home-made stays of this time.

Donated to The Bowes Museum in the 1980’s, these stays have become a popular item for costume specialists to study, and were displayed in 2013 exhibition, in the ‘Materials Remains’ exhibition in the Fashion & Textile gallery. They had to be displayed lying flat in their storage box, being too vulnerable to display mounted upright.

Now in the conservation studio, the stays are getting some much needed attention. Modern stitched repairs carried out before the stays were acquired by the museum were unsightly, badly executed, and offered little support to the object. The stitching has now been documented and removed, along with patches of cream cotton fabric, which had been used to fill holes in the lining fabric. With the patches removed, we can explore a little more of the inner layers of the stays, looking at the stitching, materials, and wool padding. The conservation treatment will replace the attempts at repair with dyed-to-match linen patches. These will visually blend into the cream coloured lining, with stitching in a fine, colour-matched thread to secure the patches and support the weak areas of fabric.

The overall staining to the outside and inside of the stays, and signs of general wear will not be altered. Likewise, the numerous historical repairs which have been made will be kept intact. The importance and interest of this object is the evidence of its use and wear, which hold further clues to life of the woman who wore it, and reflects wider society in 18th century Whitby.

The next stage is to prepare the linen support patches and carefully stitch them into place, so watch this space for the ‘after’ pictures coming soon.