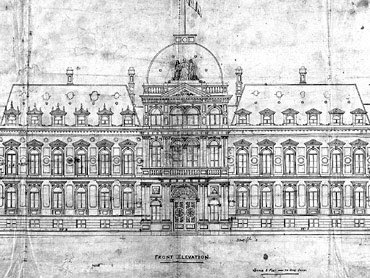 It seems a silly question, but it recurs every few months when we receive an enquiry from someone asking about the possible involvement of a relative in the 19th century.

Pragmatically, we know the Museum was designed by the French architect  Jules Pellechet (1829-1903), but he was not regularly on site in Teesdale. Effectively, the Museum was built under the direction of the Newcastle architect, John Edward Watson, and the builder, Joseph Kyle, both employed by John Bowes.

However, John Bowes was not a direct employer of the workmen and craftsmen who made the structure, and all we have are a few tantalizing references to individual contracts negotiated for the installation of exhibition cases or specialized masonry work.

For instance, in the County Record Office, are bills for letters to JT McCulloch for  ‘Architectural Sculpture’, presumably for the facade carvings, and to GS Arrowsmith in 1882, possibly for the same.  There are also negotiations with two cabinet makers in the same year, presumably for the new museum cabinets. These, however, had been bought in France in 1878 from the exhibition of that year, and Bowes was insistent that they had also been used at the exhibition of 1867 – an early example of ‘ready-made’ and packable furniture for collections.

John Bowes was an effective businessman, with an eye for detail, and he did care about the progress of the project; in January 1873 he sought to employ someone called John Wilks to be in charge of staff on the site, but Mr.Wilks declined, perhaps due the Teesdale weather!

Research on this topic is ongoing, and members of our dedicated team of archive and library volunteers are working through the archives and other sources to find further references.